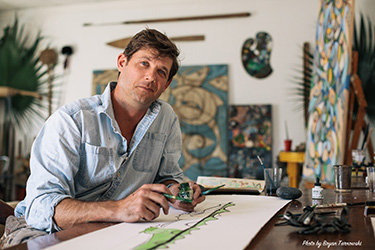 American painter and author Alex Beard is best known for his elaborate wildlife compositions created in his signature style of gesturalpainting, which he has coined “Abstract Naturalism.”

Raised in a family that fostered philanthropy, creativity and exploration, Alex has traveled extensively around the world. The diverse cultures, colors, and climates of Africa, India, China, the Americas, and Australia have profoundly influenced both his professional and artistic practice.

While earning his BA from Tufts University, he studied painting and drawing at the School of the Museum of Fine Arts in Boston. In his early twenties Alex moved to New Orleans to continue his formal training at the New Orleans Academy of Fine Arts.

Fueled by curiosity about the cultures and wildlife he had been exposed to in his early years, Alex has spent much of his life traveling to the some of the world’s most remote wildlife outposts - paintbrush in hand. His time in nature enables him to continually hone his style – creating complex compositions in which abstraction and figuration collide, while exploring themes of cultural and environmental interconnectivity.

Alex’s work figures prominently in several private and public collections and he has exhibited extensively throughout the United States, including solo exhibitions in New York, Los Angeles, New Orleans, and abroad in Hong Kong.

An impassioned conservationist and philanthropist, in 2012 Alex established The Watering Hole Foundation – a public charity engaged in saving endangered wildlife and preserving their environments. His documentary, Drawing the Line, fused his artistic talent with his dedication to preservation, chronicling the plight of the endangered Wild African Elephant, as seen through the eyes of a conservationist artist.

In addition to producing a series of short films, Alex has authored and illustrated a critically acclaimed trilogy of storybooks published by Abrams. The series, Tales from the Watering Hole, includes The Jungle Grapevine (2008), Monkey See Monkey Draw (2009), Crocodile Tears (2010), and The Lying King (2018).

Alex’s studio in the heart of the New Orleans’ creative Magazine Street shopping district. It is both the creative hub of his artistic practice and a successful enterprise. The studio is open to the public to encourage and foster interaction between the artist and his audience.

Alex lives in New Orleans with his wife, two children, two dogs, a cat, many birds, and a mess of other critters at The Pink Elephant in the Garden District.